Soon after I discovered the indie gaming scene, that there even was and indie gaming scene, I found a game developer whose work I enjoyed and who, it turned out, was a woman. I checked out her site, played through one of her games, and, on a whim, I sent her this email:

I wasn’t trying to accomplish anything specific, I don’t think. Emails such as this rarely get sent with a lot of thought put into them. I think I hoped she’d see it and laugh, see it as a spontaneous compliment for making cool work, comically exaggerated. Because I’m so funny and genuine, y’see.

And I felt funny and genuine for the maybe five minutes after I hit Send. And then on until now, I’ve felt like an asshole. This was four years ago.

Since then I’ve worried over being recognized. There are only a few degrees of separation between any two people in the indie community, and the longer I am part of it, the higher the likelihood that she’ll find my name in a press release, or a mailing list, or the credits of an actual game, or even be introduced to me at a jam or conference. Would she recognize my name from the email? Would she remember what I’d said?

Make no mistake, I’ve sent spontaneous compliments by email to developers that I like, and there’s no harm in that. In fact, given how much care and effort some people put into trolling devs and other creative types, I make a point to send unsolicited goodwill now and again as a corrective. But the only time I’ve ever phrased a compliment as a pledge for all eternity was to one of the only women in the scene.

I wondered just how many other guys had sent her similar emails. (Probably not as “artfully-phrased” as mine, but still.) I know from her Twitter she’s gotten several.

Dudes rarely send emails like this to other dudes. I certainly haven’t. And maybe a single hyperbolic email from a random guy on the internet is innocent when your general interaction with guys on the internet is respectful. But it’s not one random guy. It’s lots of dudes sending lots of similar emails, which makes you question just how innocent it is. If I’m having the same idea as a bunch of other dudes, it probably has less to do with admiring the artist and more to do with being male.

Because I sent a specific kind of email for a specific reason: because she was a woman. And while I wasn’t as educated a feminist four years ago, I still knew better.

An email like this weirdly mirrors trolling, in a way; it’s not trying to start a dialogue, or serve as a “from your secret admirer” note where the recipient wonders about who sent it. It’s completely uni-directional with zero accountability, just a note that says “apropos of nothing, some dude likes you!” Any repercussions are hers, not mine.

It’s no sin to have a mild web crush on a woman, especially one based on admirable accomplishment rather than simply being pretty. (Or was it based on the fact that she was “into” what I was into? Hard to say.) The problem is when you feel entitled to make it her problem. Go check any IndieGames.com article about a female developer and watch how few of the comments even mention her work, and how many mention how attractive she is. (Note that my email didn’t actually compliment her for making good games.) Being a woman in the indie gaming scene can be like being a woman at a bar with 30 million men, and maybe all you wanted was a drink. Dozens of articles about you and your work just keep mentioning that you’re a woman, and if you talk about what that’s like, you get feminist backlash. (Not that you need to know what this is called, but it’s called “othering.”)

I’m not speaking from personal experience, because of course it’s never happened to me, and I’m in no way more – or even as – qualified to talk about this than any number of women. I’m only saying all this to stress that I get it – I get what I did wrong. The anonymous nature of the internet makes it easy, if you’re embarrassed about something, to just pretend it never happened, and hope the other person never brings it up. But given the nature of the problem, that feels disrespectful. 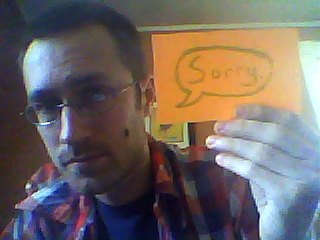 Female Game Dev, I’m sorry I was creepy. I hope you know, if we ever do cross paths, that I actually like your games and admire your work.

And I hope some sizable proportion of dudes who’ve written you weird emails feel as stupid as I do, and are just avoiding the topic. I’ve kept you anonymous in this post, but I figured it was worth saying publicly.

4 thoughts on “An Apology:”